Readers of Dan Brown’s novel the Da Vinci Code, whose curiosity leads them to search the Internet for information about the various locations mentioned in the mystery thriller, will likely come upon a web site of stunning photography. The site is the creation of photographer David P. Henry, a Paris resident since 1996 and an ardent lover of the city. Henry had the good fortune to receive a commission from Doubleday to take photos for its latest edition of the best seller-the Da Vinci Code: Special Illustrated Edition (November 2004).

Though it was released in March 2003, Henry never heard of the Da Vinci Code before June 2004, when he received an e-mail from a woman who was seeking photographs of Paris for Doubleday. She sent him a list of sites that she wanted photographed for the book and he set about the work of taking the photos. It was only during the fulfillment of the assignment that he began to what extent the book has become a world-wide phenomenon.

For example, while photographing Arago medallions embedded in the granite paving stones around the Comédie Française, he was approached by more than a few tourists who asked if he knew about the book, or if he knew about guided Da Vinci Code walking tours. And in a humorous anecdote that Henry relayed during our interview, he described the experience of launching himself through the dense bushes that keep most people from the surface of the Louvre’s Inverted Pyramid, a skylight for the Carrousel du Louvre shopping mall, underneath. An American woman yelled over and asked, “Are you looking for the Grail?” 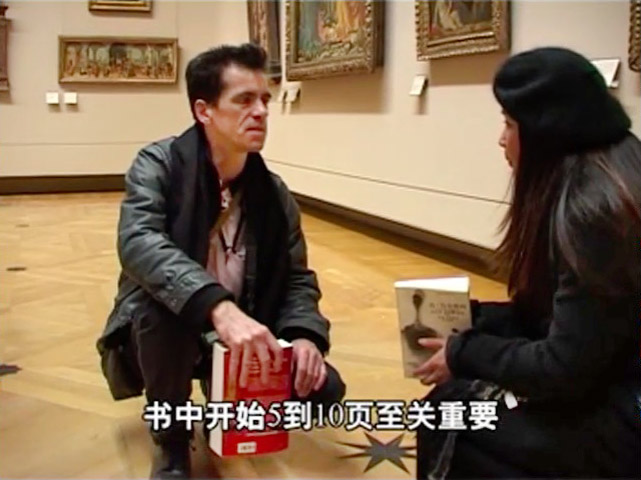 Here I am explaining a high point that occurs early in the book, in the Grande Galerie of the Louvre Museum.

Other sites for which Doubleday requested photographs were the Louvre pyramid, the astronomical gnomon of Saint-Sulpice church, the Tuileries Garden, and Sacré-Cœur Basilica. For his shots of the Louvre, Henry called the public affairs office of the museum to request permission to take pictures with a tripod. However, when he told the person at the office the reason for his request, she replied that she had read the book, that she understood perfectly why he wanted to take pictures, but that the answer to his request was categorically, «Non!». For the Louvre public affairs office, it seemed, the Da Vinci Code was already anathema!

It was not until after he finished the photo assignment that he read the novel and began to appreciate the impact of the ideas expressed in the book. “I enjoyed the book,” he said. “It gives a lot of food for thought, especially in its account of the history of the Christian church. I think that it is good to have ideas challenged. I see a lot of synergy between the Da Vinci Code and the Monty Python film The Life of Brian.”

Hailing from Boston, Henry first became interested in photography around the age of 12 or 13. When he got to high school, he started using better cameras and studying darkroom technique. He took photographs for the creative arts magazine, the yearbook, the school newsletter and calendar. He went on to study photography with Nicholas Nixon and Baldwin Lee at the Massachusetts College of Art.

In Saint-Sulpice church, explaining the function and significance of the summer equinox plaque, the brass line and the Astronomical Gnomen.

Henry’s style of photography is unique and his photos of Paris are unlike any that you will find on the Internet. In describing his technique, he says, “I don’t use a digital camera yet. As I have since forever, I still work with film, but for the last three years, I scan the negatives, then using Photoshop [a professional editing software] I adjust color, brightness and contrast, region by region. Photoshop also allows me to correct the distorted perspective seen in pictures of buildings.”

With a solid background in photography, he found work within six months of arriving in France. “After two or three years, I didn’t want to go back to the United States” he said, “especially after G.W. got elected…”

Henry likes the city because it is big, yet maintains a human scale. He muses, “There are no skyscrapers, no canyons formed by buildings where the sunlight does not fall. Taking long walks in Paris gives you the feeling of walking from village to village. You have the wide-open sky and the sunlight above.” He likes the shops that he sees as he walks, saying that they have appeal for the average pedestrian. They are not the offices of banks, tax consultants or lawyers that one finds in New York, for example, but rather small shops, art galleries, cafés, grocery stores and clothing stores.

He also likes the straightforward contact with culture and art that he experiences in Paris. “Artists and musicians pass through Paris on their way around Europe and the rest of the world. Just by staying in Paris you can see culture and art coming through the city month by month.”

The host in the television show broadcast in Shanghai is explaining how the scene with the transponder being thrown out from a bathroom window could not have happened, one of the many howlers in Dan Brown’s book.

Though he did not state it specifically, one can also surmise that Henry likes Paris because of its diverse population. His favorite residential neighborhood is the Belleville district, where he lived for eight years. He describes it as “a neighborhood of immigration: there are plenty of people from other parts of Europe and Eastern Europe. There is also a significant Jewish population. The interesting thing here is that they are quite mixed in with the North Africans: there are plenty of restaurants in Belleville that offer both North African and Jewish cuisine… many Asians have moved to Belleville, to the point where the neighborhood has become known as another Chinatown.”

Henry’s appreciation of the beauty of the city is reflected in the photographs that he has published on his web site, including a section of 25 photographs that appear in the illustrated edition of the Da Vinci Code. He also photographed Paris and its environs for the publication Paris and Île de France Adventure Guide (Hunter Publishing, 2004).

Henry started giving workshops in photography a few months ago, in French and in English. Announced only by two pages on his web site, many participants have spent a weekend afternoon learning first about technical questions, camera settings, then out in the field, spotting pictures and taking them.

Travelers to Paris will find inspiration in the many fine photographic images of the city that Henry has posted on his web site. And fans of the Da Vinci Code will enjoy seeing photographs of places in Paris that are mentioned in the best-selling thriller!

Enter the gallery of pictures of Paris

All images are © 2022, David Henry, all rights reserved. Written permission is required for any use.